In a hyper-partisan era, political affiliation matters in just about everything — even business confidence.

In fact, the CNBC|SurveyMonkey Small Business Confidence Index has maintained a double-digit buffer between Democrats and Republicans throughout the Trump administration, with Republican small business owners consistently reporting a more positive outlook on the current state of their businesses and their prospects for the coming months.

Even when comparing results industry by industry, Republican small business owners are regularly more optimistic than Democrats, indicating that there’s more to this division in sentiment than can be judged by market- or industry-wide conditions. Small business owners, like everyone else, have a tendency to view the world through a partisan lens.

Polling among the general public regularly shows that Republicans have more confidence in the economy and fewer concerns about a coming recession relative to Democrats. Over the course of 2019, our quarterly survey results point to several instances of small business owners reporting opposing business conditions that are likely based in partisanship rather than balance sheets.

While the impeachment process has been making front-page headlines for several months now, it has only accelerated in recent weeks. Now, nearly four in 10 small business owners (39%) in the Q4 CNBC|SurveyMonkey Small Business Survey say the impeachment of President Trump is likely to have a material impact on their business; a majority (58%) say their business will likely not be affected.

Republican small business owners are more likely than independents and Democrats to expect their business to be affected by the president’s impeachment (47% vs. 33% and 31%). 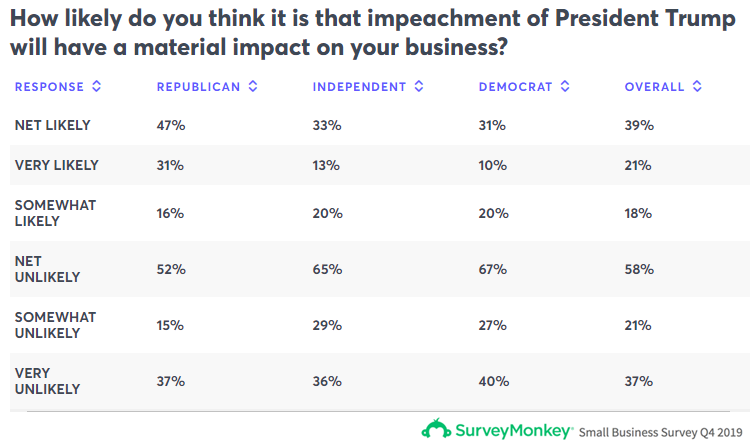 This latest quarterly survey was conducted from November 12-18, with responses from more than 2,000 small business owners across the country. While the impeachment inquiry opened in late September, the first publicly-televised hearings began on November 13, during the survey field period.

Some business owners may simply see impeachment inquiry as a distraction — just something else that prevents real work from getting done in Washington. Or, those who foresee more extreme consequences may see Trump’s potential removal from office as a threat to the regulatory, tax, and trade policies that they support. Small business owners’ expectations around those three factors all improved mildly quarter over quarter in these latest survey results.

One important consideration: national polling thus far shows that Congress’s impeachment inquiry hasn’t moved President Trump’s approval ratings either up or down. These latest small business survey results show the same: a wide majority of Republican small business owners continue to approve of the job Trump is doing, while a wide majority of Democrats still disapprove.

While impeachment dominates the news in the U.S., the U.K. is currently consumed by Brexit. The now three-year-long crisis regarding whether Britain will leave or remain in the European Union will have drastic consequences for companies large and small across Europe and in the U.S., too.

In this quarter’s survey, one in five small business owners (20%) in the U.S. say they anticipate a material impact on their business as a result of Brexit — of course still without knowing whether Brexit will actually happen or what form it will take when it does.

Once again, a partisan divide emerges: twice as many Democrats and independents versus Republicans say that Brexit will impact their businesses (28% and 26% vs. 14%). 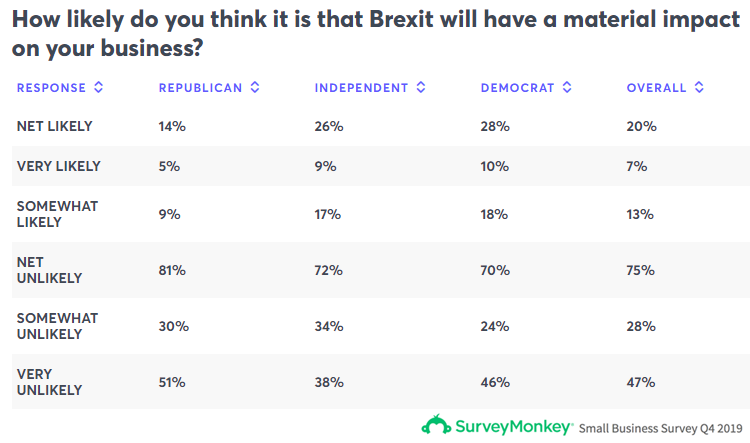 What sorts of “material impacts” might these small businesses be anticipating? Small business owners in the retail trade industry are some of the most concerned: 30% say they will be affected by Brexit. As a group, they also have lower than average positive expectations when anticipating the effects that government regulations (20% vs. 24% overall), tax policy (20% vs. 29% overall), trade policy (12% vs. 24% overall), immigration policy (10% vs. 16% overall), and even technological innovation (40% vs. 48% overall) will have on their businesses. For them, the additional uncertainty incited across the pond may not be as far away a problem as it is for small business owners in other industries.

Going back to the start of the year, in the first quarter CNBC|SurveyMonkey Small Business Survey, only 16% of all small business owners said their business was affected “a great deal” or “a good amount” by the federal government shutdown that had just taken place. However, Democrats and those who lean to the Democratic Party were more than three times as likely as Republicans and GOP-leaners to say their businesses were affected (29% vs. 7%).

As with the impeachment and Brexit examples, some of small business owners’ shutdown beliefs could be partisan posturing. In the Q1 small business survey, not everyone who reported being affected could point to a specific business impact. Some 35% of those small business owners who said they were affected experienced a sales slowdown and 13% said they lost a contract with a government agency — both direct and tangible measures of impact. Others said they were affected because of delayed regulatory approvals (14%) or restricted access to Small Business Association loans (10%).

But many others wrote in responses that indicated psychological or political uncertainty was affecting the way they were running their businesses — concern for an employee whose spouse was furloughed, for example — and those sorts of fears could easily be influenced by partisanship.

In the same way today, small business owners who expect to be affected by the president’s impeachment — or by Brexit, for that matter — may be foreseeing any number of potential outcomes, and these data don’t provide in-depth insights into whether the anticipated impact is good or bad, immediate or remote. But, there are clues, and as has so often been true in recent years, they lead back to the issue of partisanship.

This CNBC/SurveyMonkey online poll was conducted Nov. 12-18, 2019 among a national sample of 2,081 self-identified small business owners ages 18 and up.

See full results of the fourth quarter CNBC/SurveyMonkey Small Business Survey. The survey is conducted quarterly using SurveyMonkey‘s online platform and based on its survey methodology.