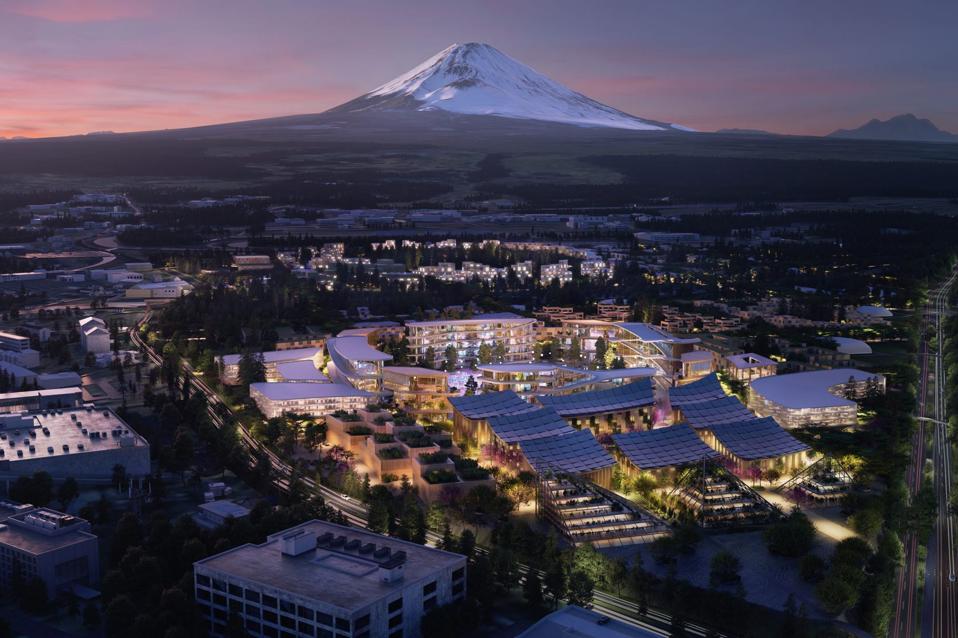 Japanese automotive giant Toyota is planning to create a “smart” city at the foot of Mount Fuji. Ground will be broken on Woven City next year. The 175-acre site is a former Toyota car factory, but only autonomous cars will penetrate the prototype city, which will also be a test-bed for mobility-as-a-service, in-home and on-street robotics, and connected technologies.

Building on early 20th Century ideas of the “Garden City,” Toyota town will feature extensive greenery and pedestrian-friendly plazas. Despite Toyota being a car maker, Woven City will not be car-centric. This is a far cry from the futuristic cities as imagined by automotive companies in the 1940s and 1950s when it was assumed motor cars—often autonomous to boot—would dominate. (“Futurama,” a General-Motors-sponsored exhibit at the 1939 New York World’s Fair featured automated highways and vast suburbs—visions that soon came true, but which many now consider to be dystopian.)

“Building a complete city from the ground up, even on a small scale like this, is a unique opportunity to develop future technologies, including a digital operating system for the city’s infrastructure.”

Speaking from the Toyota booth on the first day of the CES tech show in Las Vegas, Toyoda added:

“With people, buildings and vehicles all connected and communicating with each other through data and sensors, we will be able to test connected AI technology in both the virtual and the physical realms.”

The city has been designed by Danish architecture firm Bjarke Ingels Group (BIG), which was responsible for 2 World Trade Center in New York, and Google’s headquarters in California and London.

The masterplan of the city includes separation of transport modes, with highways for faster vehicles only, as well as “personal mobility lanes” for lower speed traffic including electric bikes, scooters and high-tech wheelchair-type vehicles, such as the i-REAL, a concept vehicle unveiled by Toyota in 2012. There will also be dedicated infrastructure for pedestrians.

“A swarm of different technologies are beginning to radically change how we inhabit and navigate our cities,” said BIG’s founder Bjarke Ingels.

“Connected, autonomous, emission-free and shared mobility solutions are bound to unleash a world of opportunities for new forms of urban life.”

Woven City’s buildings will be made mostly of wood to minimize the carbon footprint, using traditional Japanese joinery. In addition to power generated by hydrogen fuel cells, rooftops will generate solar power.

Toyota plans to populate Woven City with 2,000 Toyota Motor Corporation employees and their families, as well as retired couples. Their homes will be dripping with sensors, checking on everything from health to provisions.

“To move residents through the city, only fully-autonomous, zero-emission vehicles will be allowed on the main thoroughfares,” said a Toyota statement, adding that “e-Palettes” will be used for transportation and deliveries, as well as for mobile retail.

Toyota wants Woven City to be a “real-world incubator” and is inviting commercial and academic partners to work on projects in the proposed development.